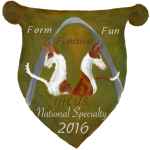 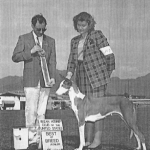 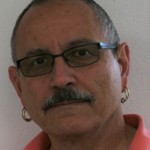 My experience with sighthounds dates back 45 years at this point in time. I got my first Afghan Hound in 1971 and two years later my first Whippet. Since that time I have bred a number of Whippet champions under my Timbrel prefix and had some tremendous good fortune with a very small breeding program. Over the years, I have also owned and shown Salukis and one very incredible Ibizan Hound. I currently have two Whippets and a Saluki.

I initially started studying Ibizan Hounds so that I could apply to judge them as part of the Hound Group. The more I learned about and was around this fascinating breed the more I liked and enjoyed them. So it was inevitable that I would end up owning one (although truth be told it was much more the other way around). I picked Cali up from her breeder, Mary L. Toliver, in March of 1992 and my household was changed for the next twelve years. Cali who became Ch. Hemato Cosa Caliente Timbrel was probably one of the smartest dogs I’ve ever known. She was a complete joy to be around and live with – except, of course, when she was showing all of my other dogs how to get into the same mischief that she had just figured out how to get into herself.

I was approved to judge Ibizans in 1992 by the AKC and shortly after that I had one of the greatest honors any judge could have given them bestowed upon me – I was asked to judge the first Ibizan Hound Club of the United States National Specialty ever held. This event took place on March 25, 1993, in Scottsdale, Arizona.

I joined IHCUS in the mid-1990s and was the Judges Education Coordinator for three years during the tenure of my membership. I was also the Show Chair for the three IHCUS National Specialties that were held in Albuquerque, New Mexico during that time frame.

I want to thank the members of IHCUS for asking me back to once again judge your National Specialty. I am greatly honored once again. 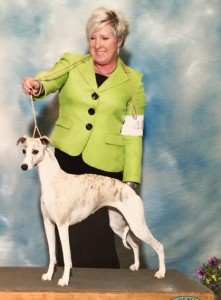 I grew up with toy poodles and German shepherds and was showing as a child although somewhat sporadically as my Dad liked to motor cross so I did that a lot! I got back into showing in my late twenties when I got a whippet puppy from a friend who also had Ibizans. I fell in love with her female named “Batty”, CH Cien’s Cara Mia By Danzante. She lived with her but she let me show her if I was going to a show. I have always owned, bred & shown whippets & later on thought adding an Ibizan Hound would be fun & it has been! I got my first Ibizan from Nancy & Harry Stabler, “Dreamy”, CH Imagery Cloud Nine Dream Supreme who had me hooked the minute I got her! I have been lucky to have had beautiful Ibizans over the years from fabulous breeders & have finished them all & also had some nice group placements as well. It has been so awesome to see how nicely our breed has evolved over the years & I am deeply honored that my peers have asked me to judge their beautiful puppies! I look forward to seeing everyone & their fabulous Ibizans at the National.

IHCUS Would Like to Thank the Following 2016 Auction Donors:

RV Parking reservations will open as of July 1st….

Send in your reservation early in order to get a spot.  There are 5 clubs hosting their National Specialty this year

Lure Coursing: A group shot (by photographer Penny McNeil), will be taken of all handlers/owners/dogs that are available at the Lure Coursing Field. The picture will be taken before the ribbons are awarded at both AKC and the ASFA Trials.

Purina will be sponsoring the following trophies (in addition to the trophies donated by or sponsored by individuals).