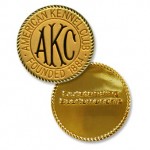 In the American Kennel Club’s ongoing efforts to recognize and celebrate its volunteer club members, The AKC Outstanding Sportsmanship Award program was established in 2006 to provide each member club with an AKC Medallion to award to one of its own on a yearly basis.

This award honors those individuals who deserve special recognition that have made a difference in the sport of purebred dogs, embodied the AKC Code of Sportsmanship, and have been an active and valued member of an AKC member club. Medallions are awarded solely at the club’s discretion. IHCUS policy is that a member cannot be awarded the medallion more than every 3 years.

PREFACE: The sport of purebred dog competitive events dates prior to 1884, the year of AKC’s birth. Shared values of those involved in the sport include principles of sportsmanship. They are practiced in all sectors of our sport: conformation, performance and companion. Many believe that these principles of sportsmanship are the prime reason why our sport has thrived for over one hundred years. With the belief that it is useful to periodically articulate the fundamentals of our sport, this code is presented.