Only dogs that are in the Top 20 for the eligible year will be allowed to compete.

The person on the committee that is choosing the judges can NOT compete in the Top 20 and will submit to the Board up to five (5) names for each of the judge categories for the BOD to review.

The BOD will then choose a minimum of 3 judges for each category from which the person choosing the judges can select from.

Judges to Be Announced at the event 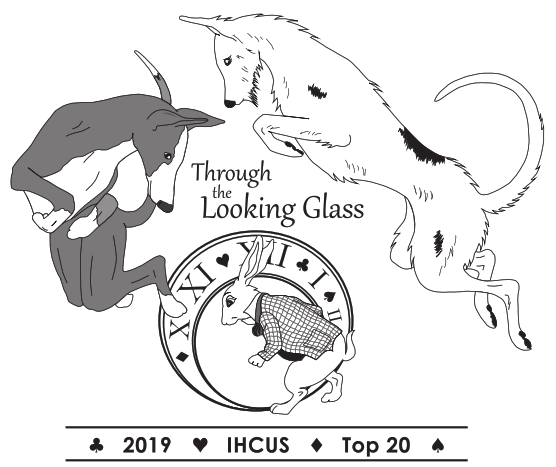 
To enter the Top 20 please go to the IHCUS Store

6:15PM
All dogs participating in the Top 20 to assemble at the entrance to the ring and they will be placed in Catalog order.

6:30 PM
All dogs participating in the Top 20 will enter the ring in catalog order, move around the ring twice as a group and then exit.

Each participant will be called into the ring and announced by name in catalog order one at a time. At that time, the dog’s bio will be read aloud with the music of handler’s choice playing in the background. The song cannot have the dog’s call name or registered name associated with it.

While the bio is read aloud; the handler will show off the dog. Participants will enter the ring and do a full go around and a down and back. Also, handlers will be allowed to show off the dog in a conformation manner only. If the song ends before your bio is finished reading your song will start over. Once the bio is finished being read, handlers are asked to do a final go around and exit the ring.

Once all bios are read, the group will re-enter the ring, move twice around the ring as a group and then exit.

Announcement of judges, their Bios are read at this time

**Judges should remain at least 3 feet or 1 yard from each other at all times. Talking between judges or their stewards is strictly prohibited before or during the top 20 event. Any and all score sheets are to only be seen by the judge and their steward and no one else until final tally.

RING MANAGEMENT
1. Each of the 3 judges will have their own ring steward. There will be two additional ring stewards to help facilitate the order and management of the ring.
2. Three dogs will be allowed into the ring at one time in catalog order.
3. Each dog individually will be asked to move around the ring only one time upon entry to the ring.
4. Each dog will then move to one of three designated areas for stacked inspection.
5. When all three dogs are stacked, the three judges will go over one dog individually (at this time each dog will be inspected by one judge for one minute) then the dog with move to the next designated area.
6. After all three dogs have been inspected by all three judges, the dogs will then get ready to move down and back individually in catalog order.
7. The handlers will move the dogs individually down and back one time. At the finish of the down and back the dog will free stack in the middle of the ring.
8. After the free stack the handler will be asked to move the dog individually, around the ring once then exit.
9. At this time the judges have 30 seconds to finish the judges scoring sheet for that particular dog. The judges will then ask the next dog to move in the same manner and order as the previous dog.
10. Once dogs have been judged the ring steward will escort them to a holding area and a new set of three dogs will be escorted to the ring.
11. All the dogs will then be asked to come into the ring all together as a group for final viewing by the audience. They will go around together as a group and stack one last time.

Once the final judging is complete and score sheets are being tabulated, the dogs will be brought back into the ring, one at a time in catalog order, announcing their name and they will be presented with their rosette. They will remain in the ring until the judging score sheets are finalized and the Top 20 and People’s Choice are announced. Photos will be taken at this time with all dogs, handlers and judges (group photo before Win Photos).